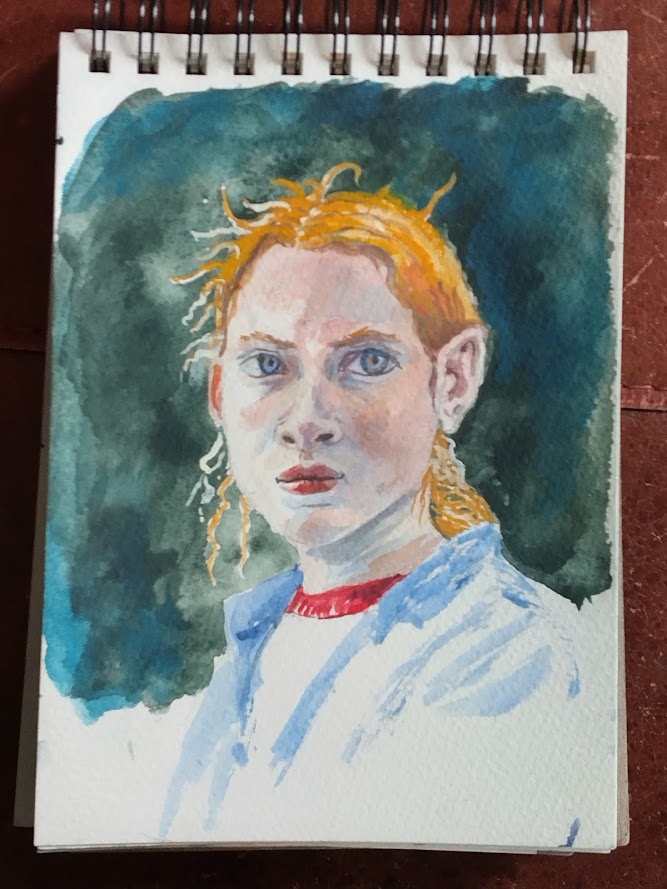 I’ve been enjoying the 4th series of Stranger Things, and decided to occupy myself during the wait for the final episodes with some character portraits in watercolour.  These are all A5 size, in inktense watercolour.  Max, above, is the portrait that I’m most happy with. 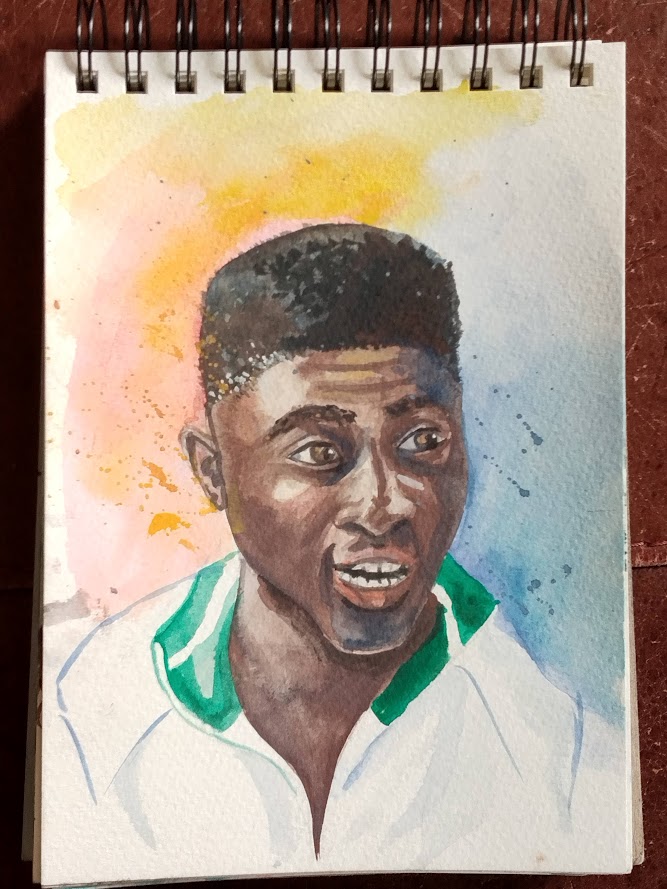 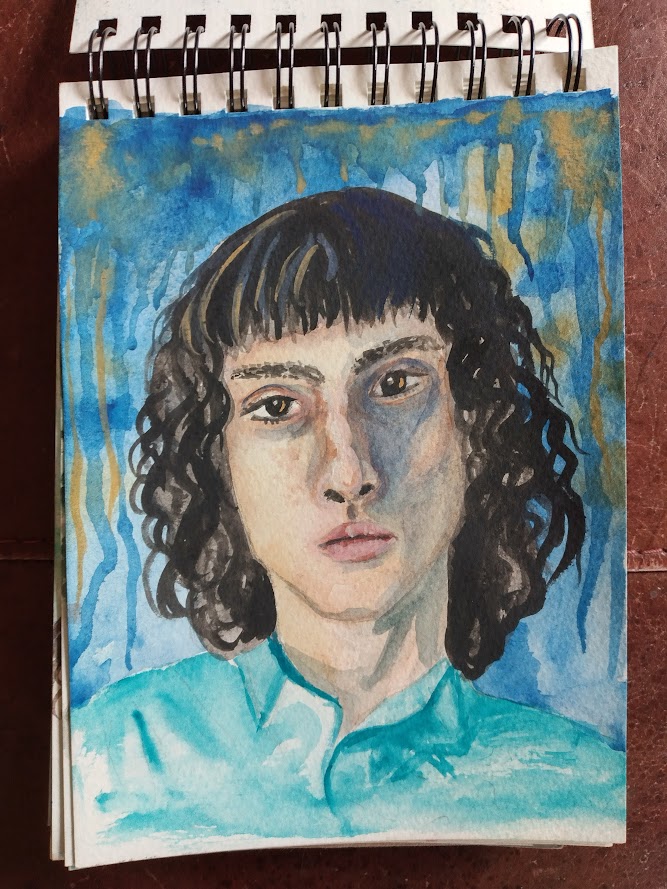 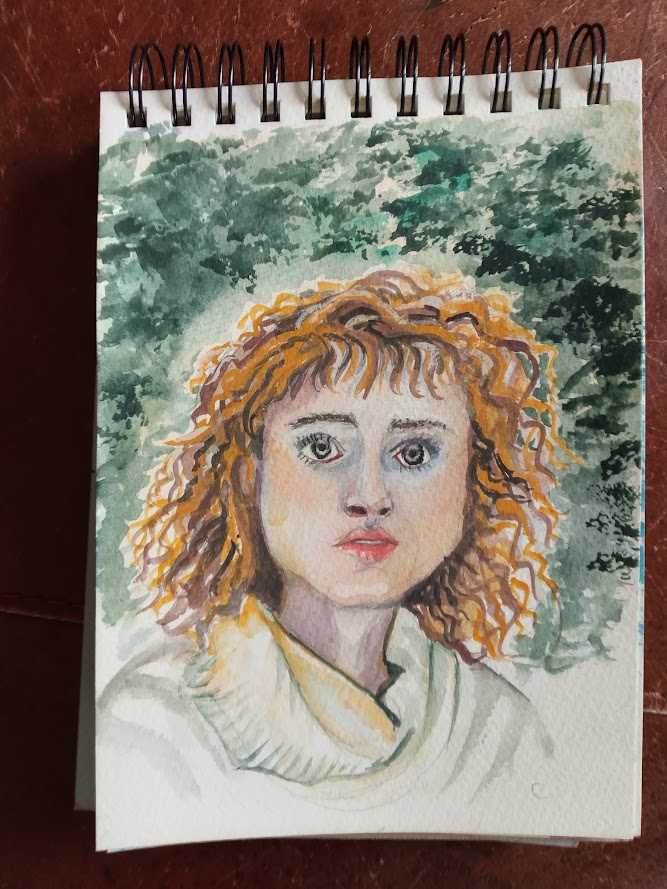 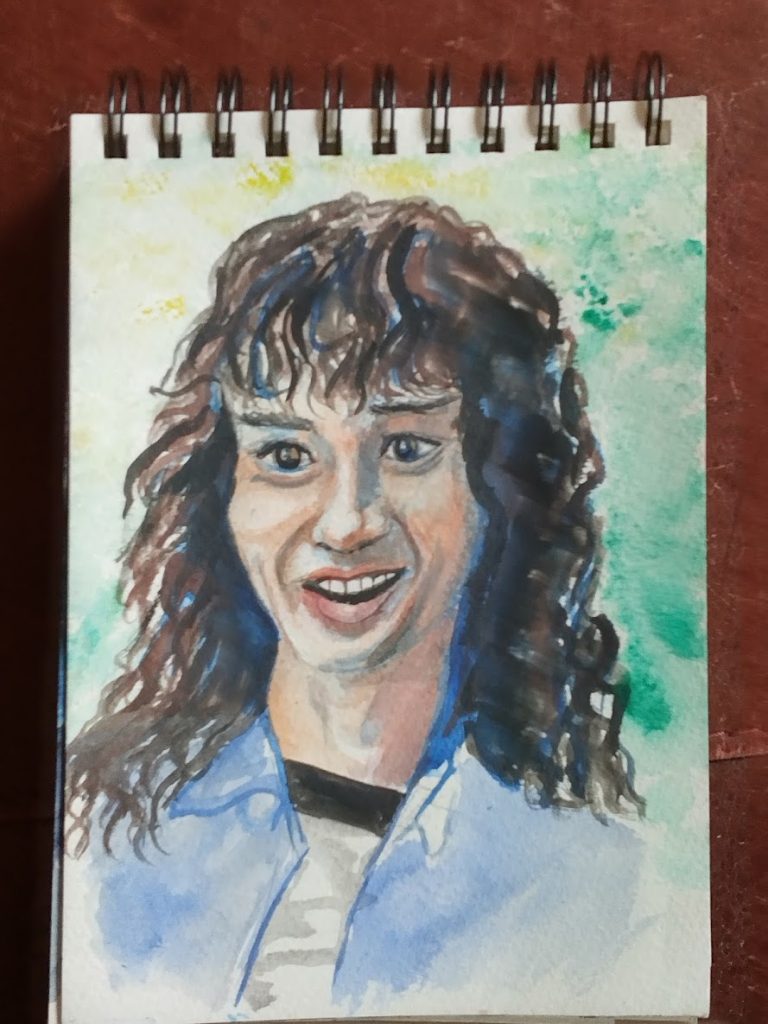 Two attempts at Eleven, one with hair and one without: 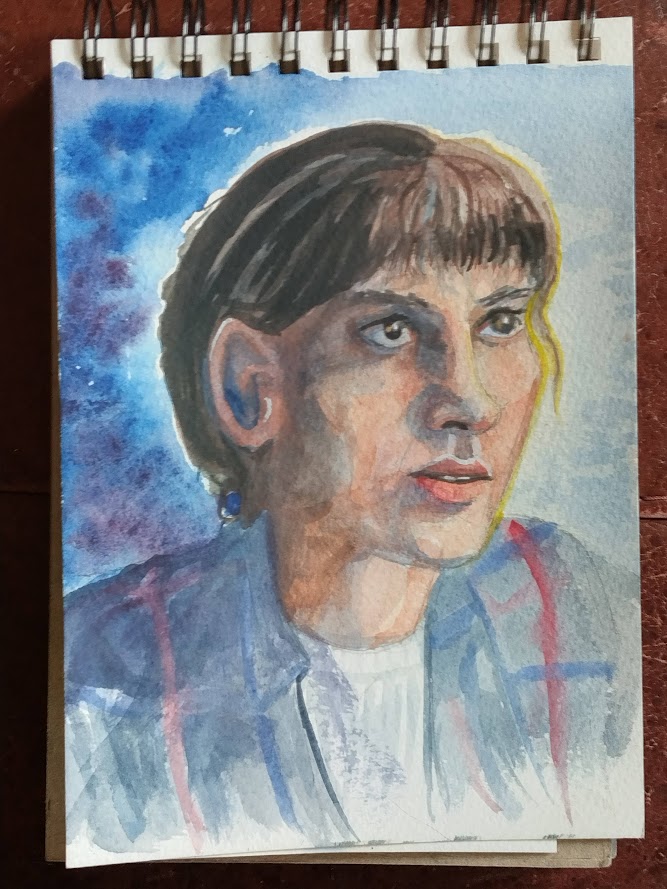 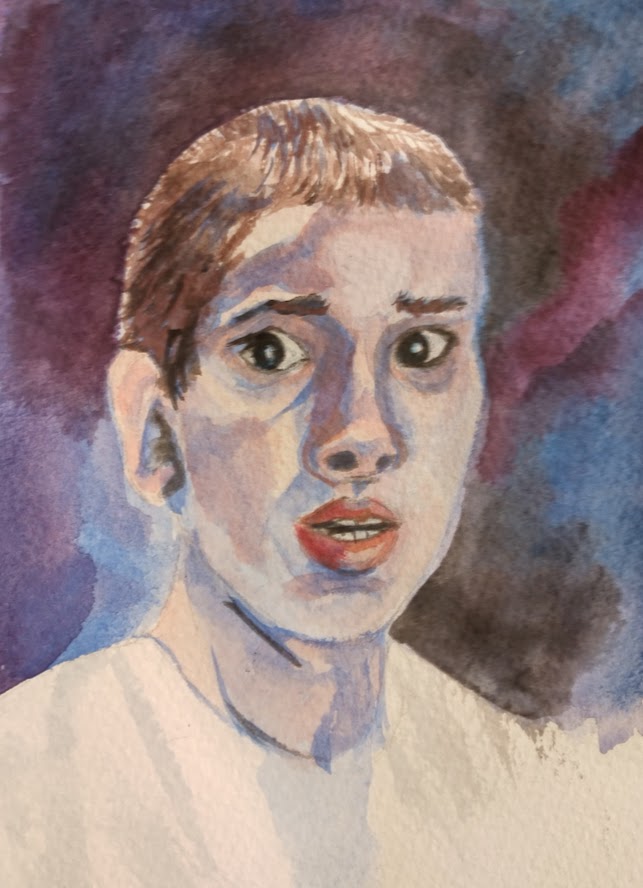 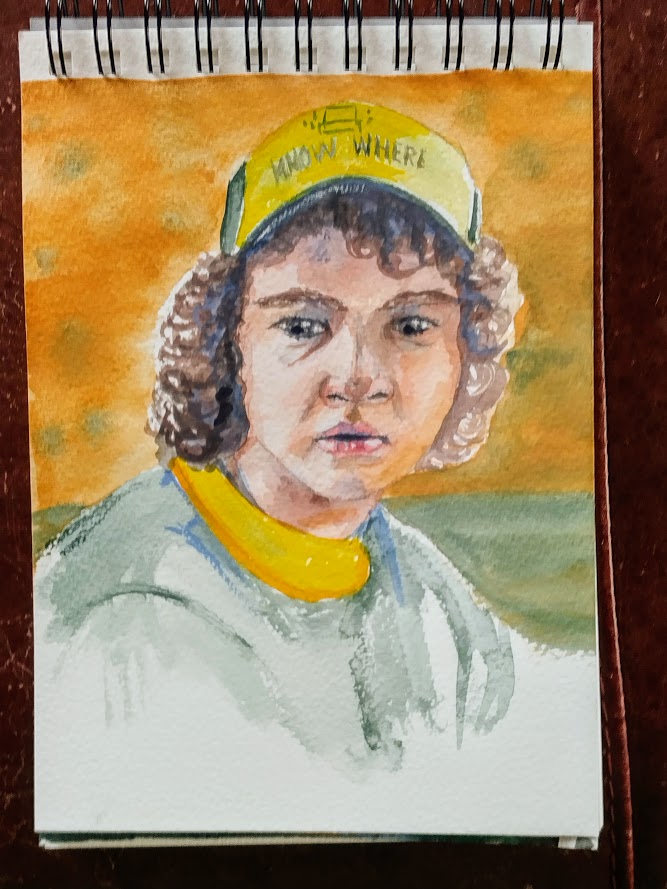 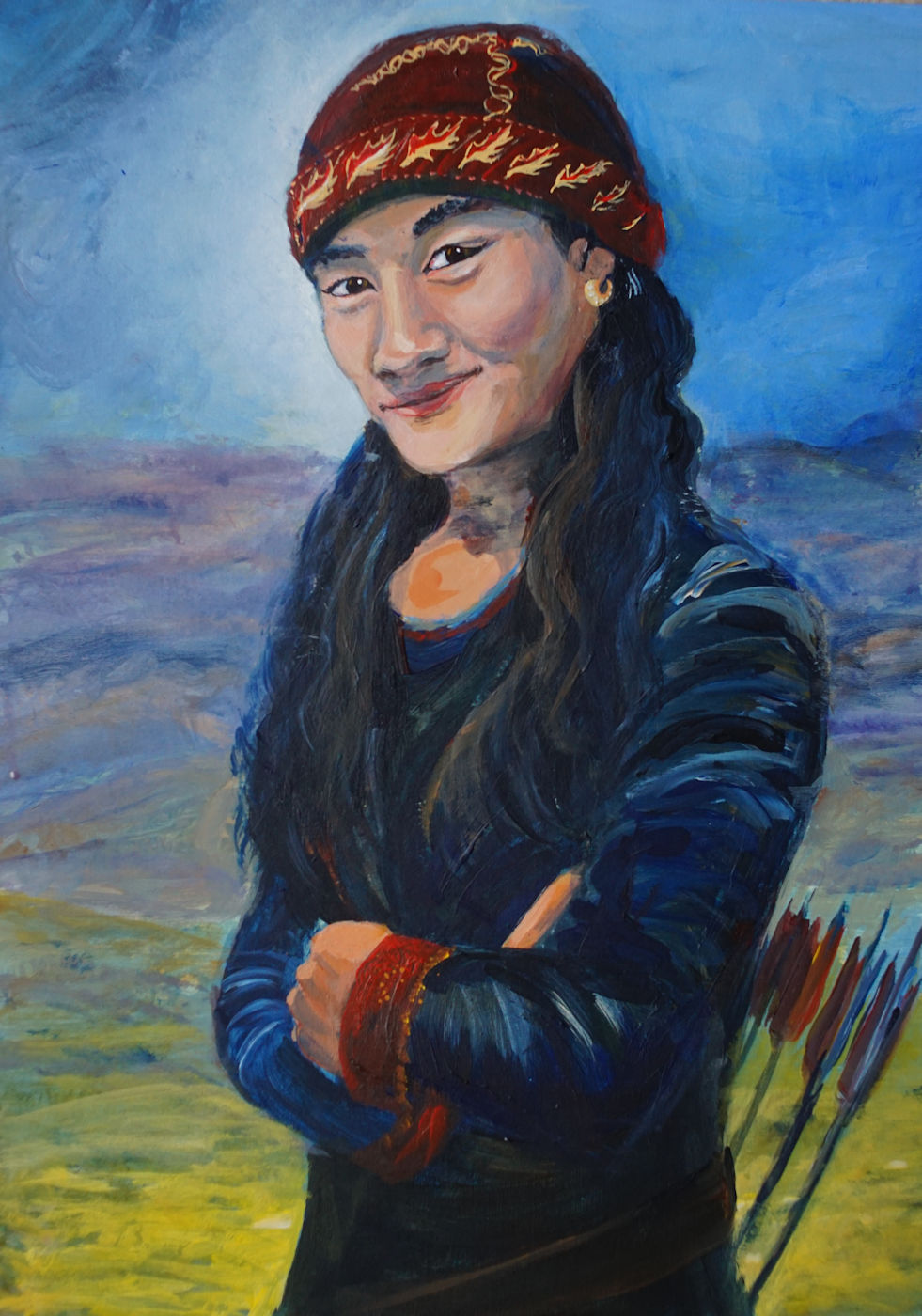 The painting above is inspired by a photo I saw of a girl from Kazakhstan at the World Nomad Games.  The two below are sketches done for fun, and without references. 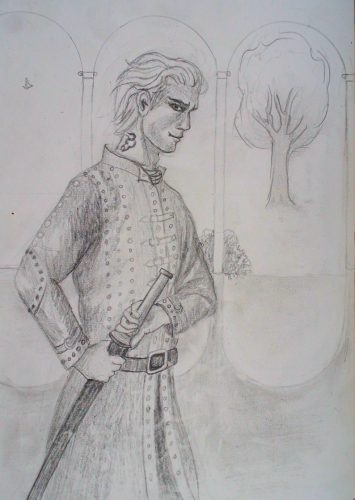 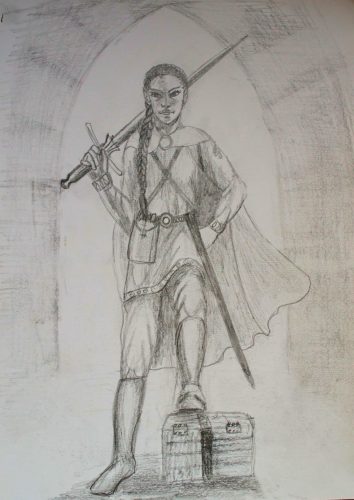 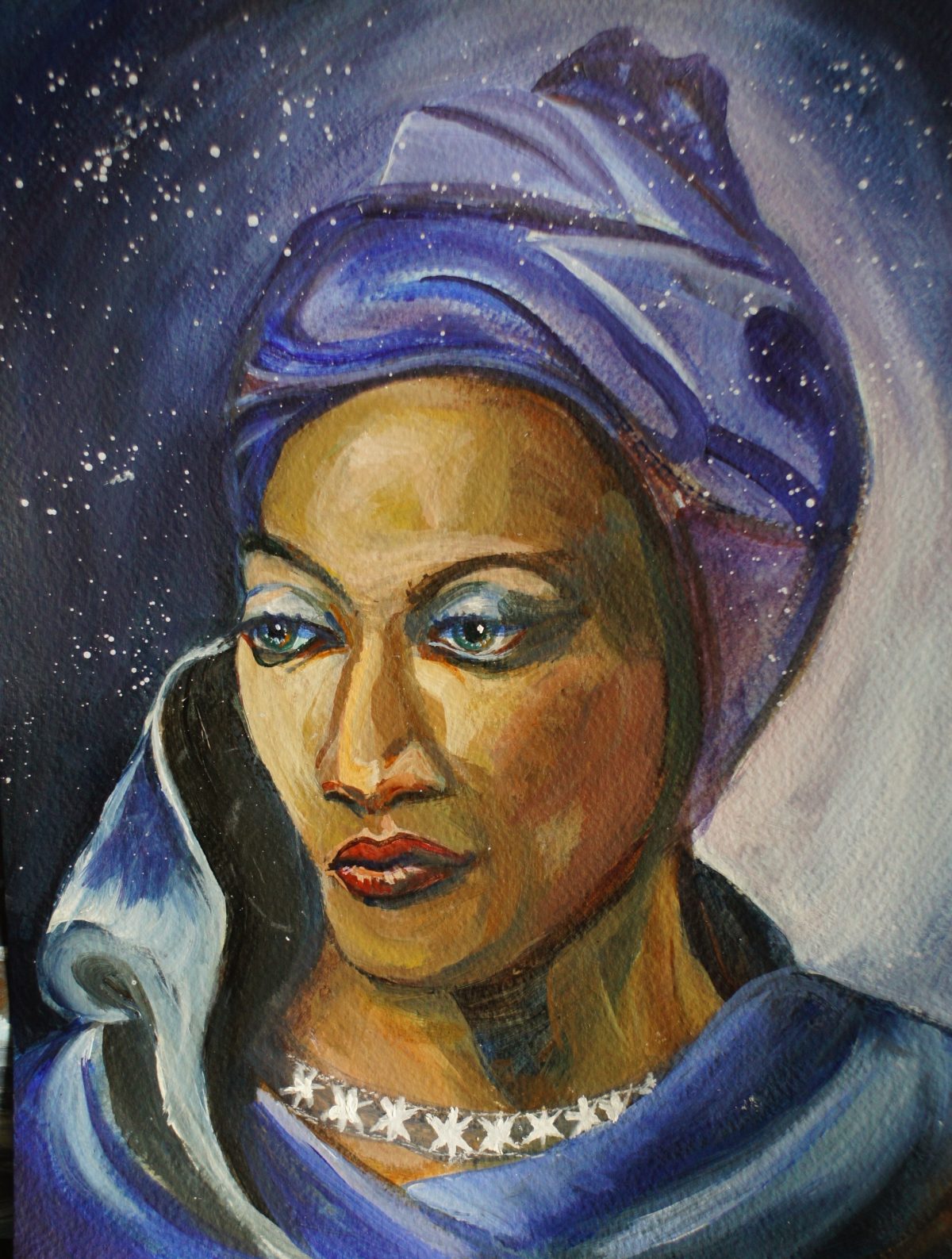 Someone suggested I should paint the opera singer Jessye Norman as Varda, from the Silmarillion, so I did. It was a lot of fun making the clothes and sky matching shades. 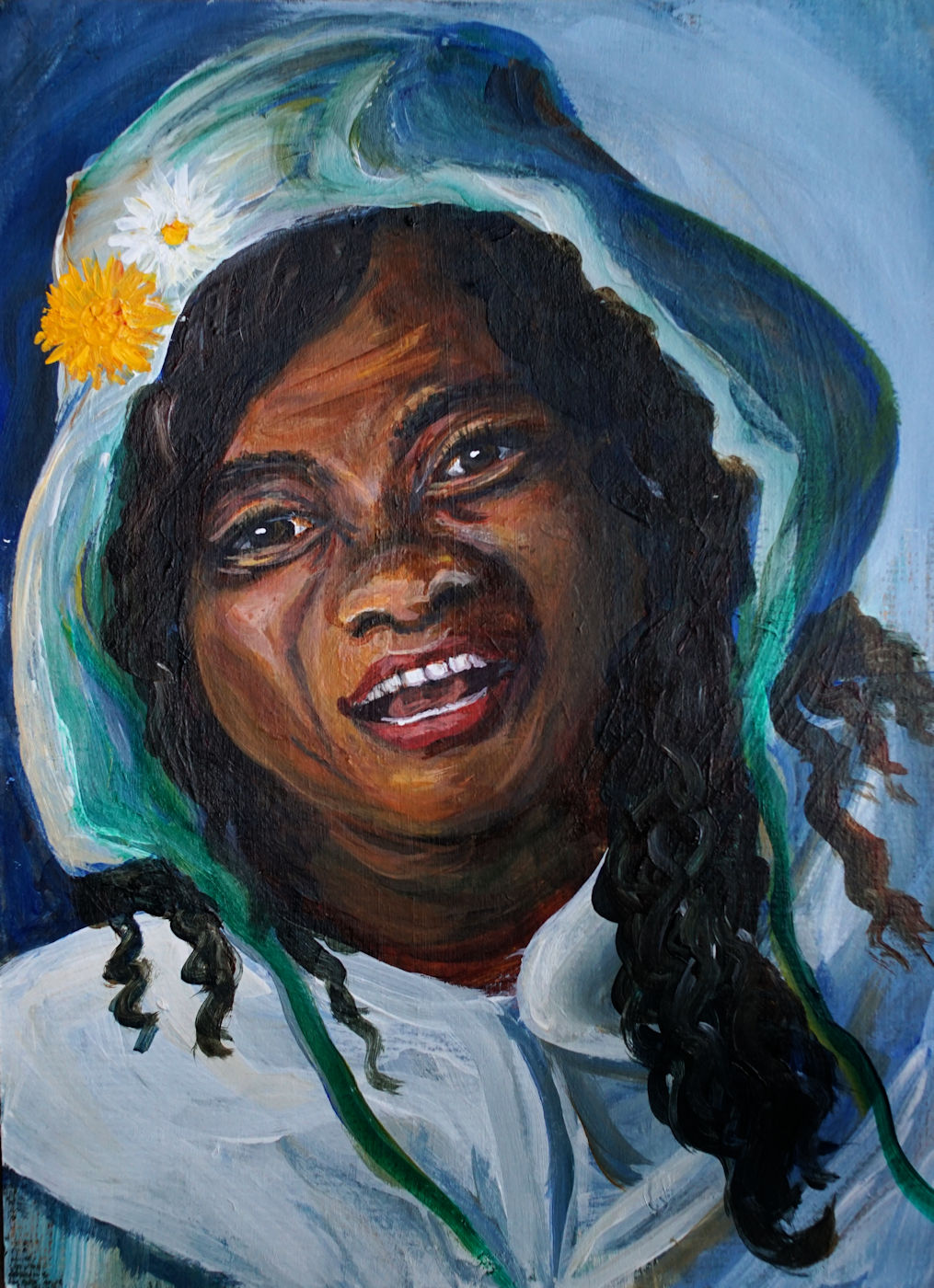 I asked people on Tumblr whose portrait I should paint, for practice, and my friend Narya nominated Loretta Devine as a hobbit. So here she is! 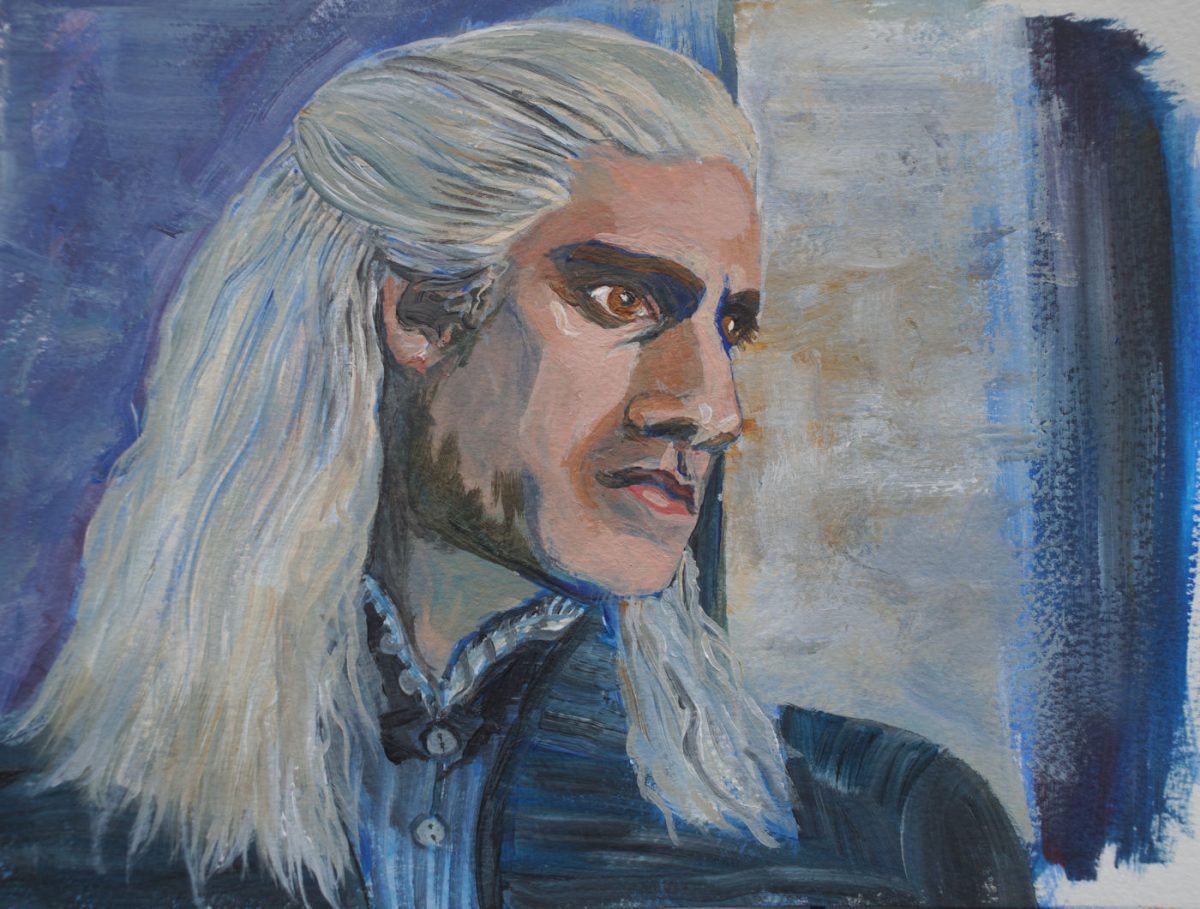 I’m doing some portrait practice at the moment and since I much enjoyed The Witcher TV show on Netflix, I thought I’d paint a couple of the characters.  These two are both A4 portraits in acrylic on cotton watercolour paper (which seems to work OK for acrylic too!) 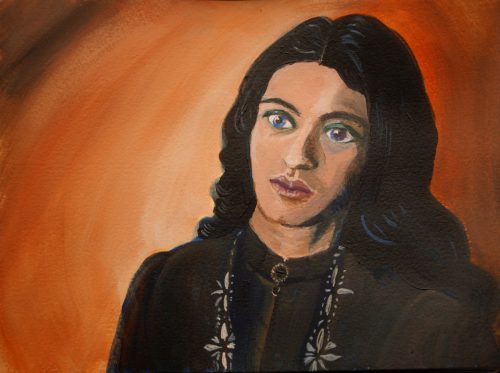 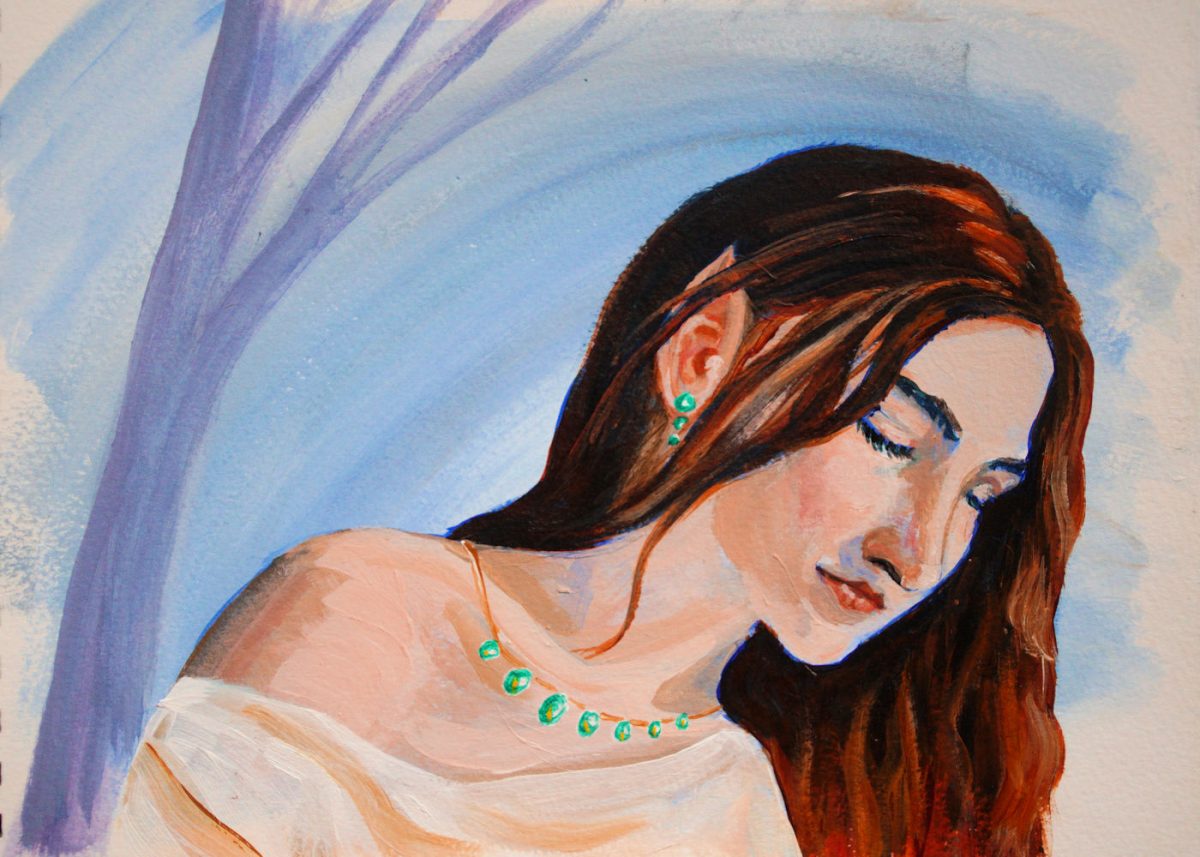 I think this is another Silmarillion character: one of Mahtan’s sisters, Nerdanel’s aunts.  She has a number of names, but most people call her Sarezelle, for her love of green stones.   She is one of the elves who sometime takes the things made by the friends of Aule to market in Tirion, but she’s more of a thinker than a maker herself. 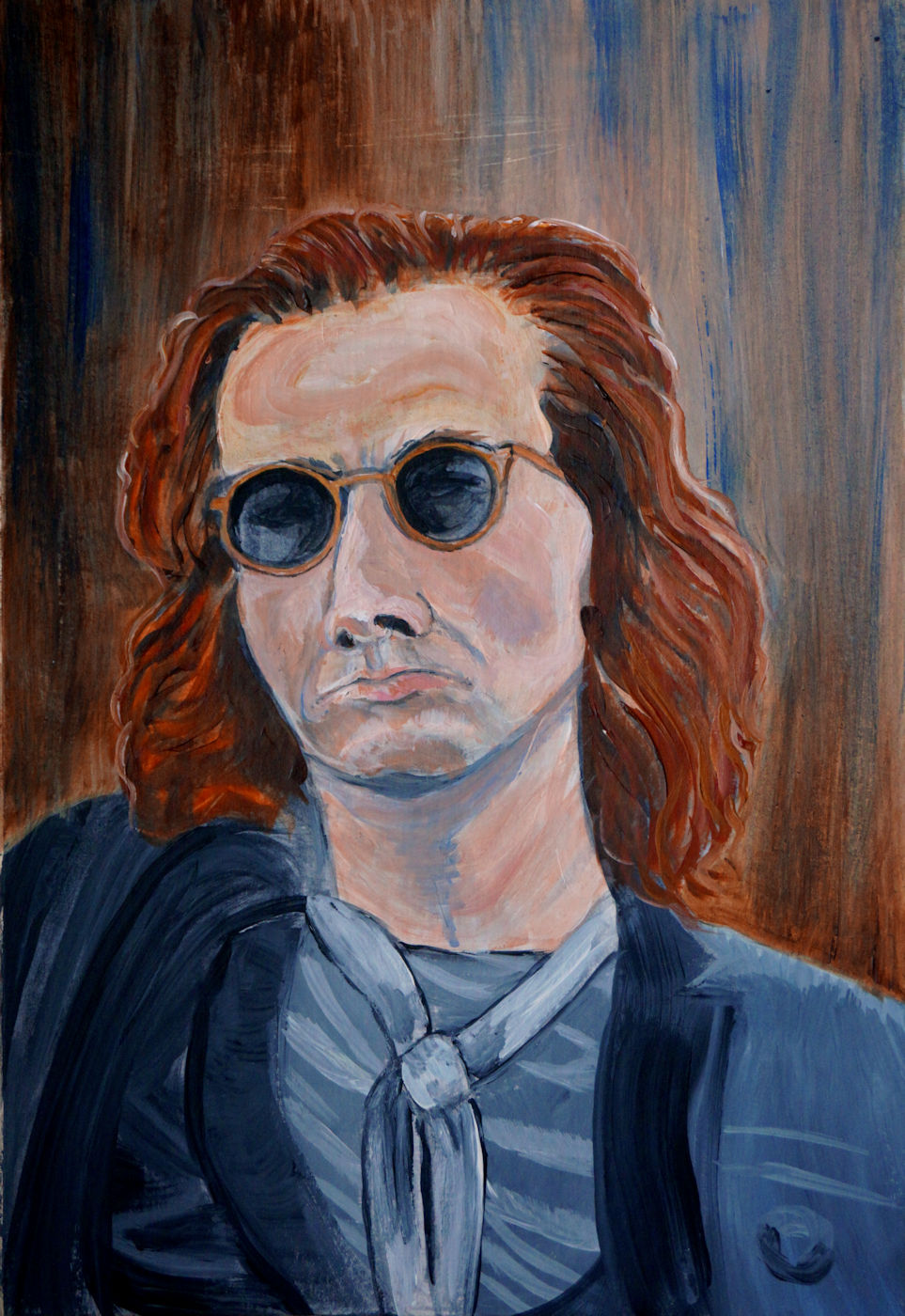 I wanted to practice some portraits, so here is an A4 portrait of Crowley, played by David Tennant, in Good Omens.  I’ve loved the book of Good Omens by Terry Pratchett and Neil Gaiman for many years, and it was a delight to see it brought so faithfully to life on the screen.  Below, Michael Sheen as Aziraphale.   These two are both acrylic paintings. 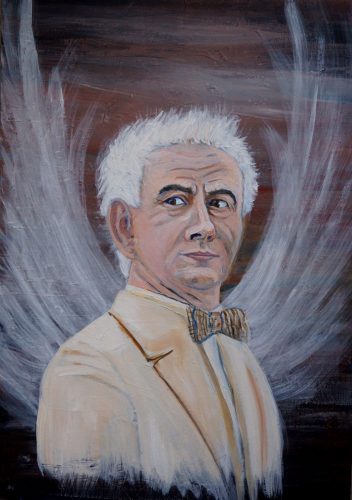 Another much-beloved book – well, series of books, really, is Megan Whalen Turner’s Queen’s Thief series (I’m eagerly looking forward to the last book!)  So here we have Helen, Queen of Eddis, with her short curly hair, dark skin and broken nose, set against the mountains of Eddis.  Irene, Queen of Attolia, with her pale sad beauty, and her land rich with grapes and grain, and in the middle, the Queen’s Thief himself, Gen (Eugenides) who will marry Irene and become Attolis, the King of Attolia.

These are inktense pencil watercolours, apart from Helen’s face, which I made a horrible mess of on the first attempt and had to re-paint over the top using acrylic paint. 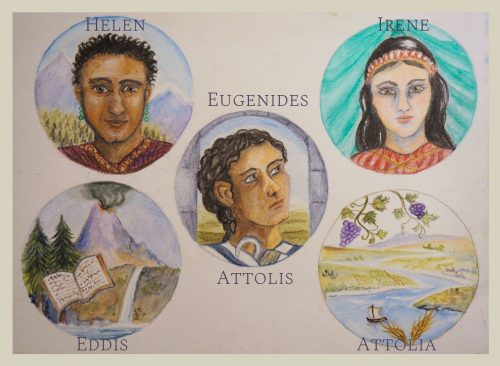 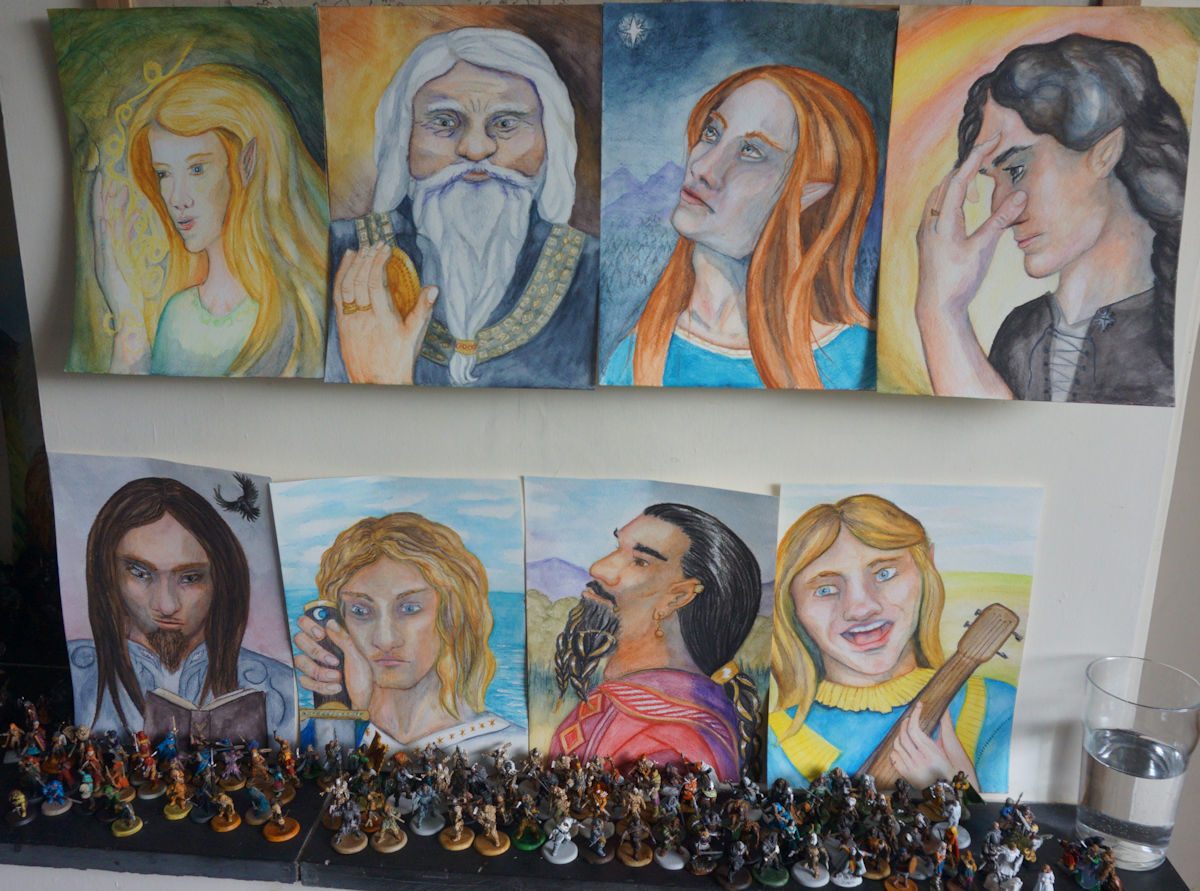 I’ve been playing in a roleplaying campaign for five years now, run by my husband, and set in the world of Second Age Middle-earth.  One great thing about roleplaying is that you meet lots of fascinating characters and get ideas for all kinds of exciting scenes.  Some of these were painted in advance, but most of them were made pretty quickly during the actual campaign time, with the players giving their own ideas of what the characters should look like.

These are almost all A4 paintings, watercolour inktense pencil on watercolour paper, though the two bottom right are larger and were painted in acrylic on artcard. 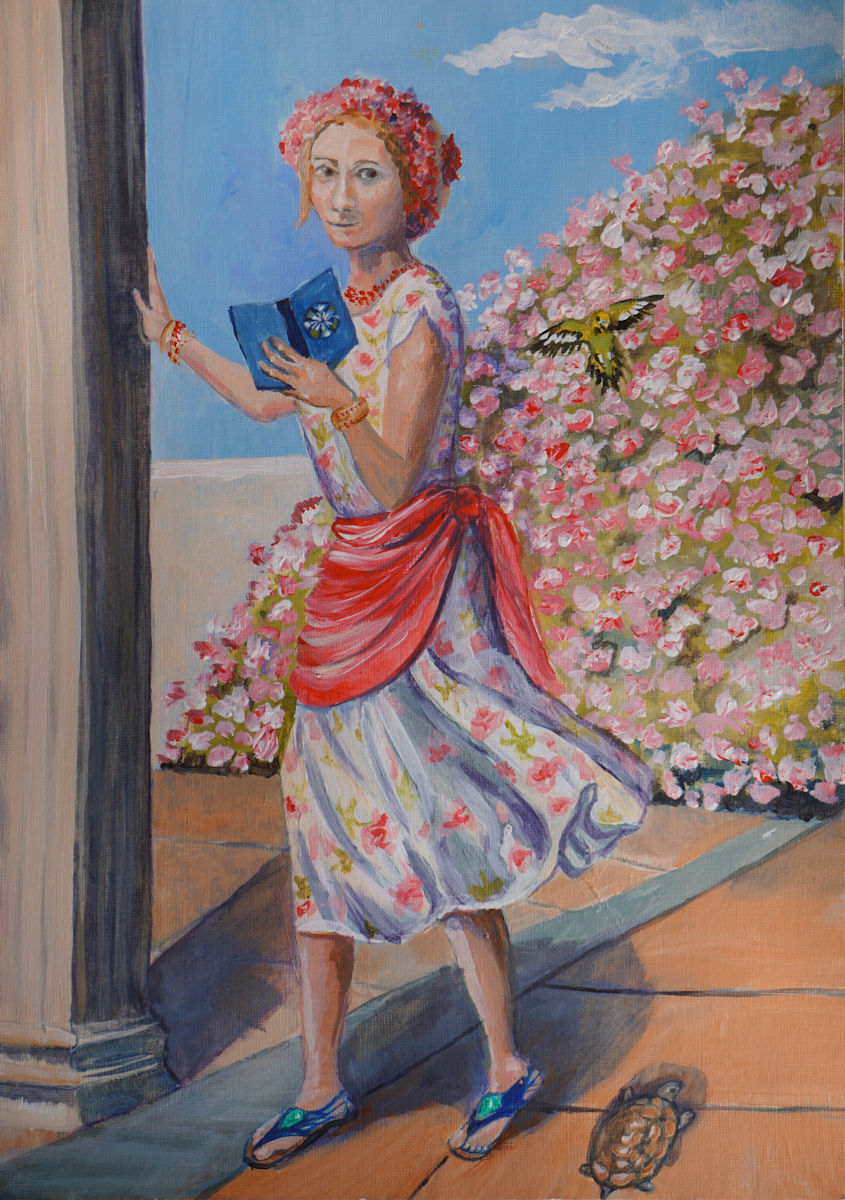 A friend of mine sent me a quick selfie a while ago of herself wearing a dress that she had made. I thought the pose and expression was interesting (as well as the dress being lovely) and so I made a painting of it – though, I had to change a lot of things.
The original photo was taken with a phone camera into a mirror, indoors in artificial light.  This is the painting I made from it. 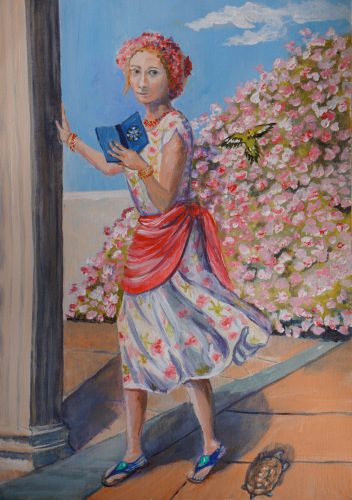 My friend is a great lover of books, so I turned the phone in her hand into a book, and added her pet budgie and tortoise to the picture to keep her company, along with an enormous rose-bush and a random pillar.

This picture is only 14 by 10 inches, so I’m quite pleased I achieved a likeness in such a small space.

I went through several iterations of this painting, and photographed each one as I went along, so I thought it might be interesting to post each one.

Version 1.  Her face looks washed out, the shadows look odd and the pillar is wiggly. Also there’s something odd about her pose. 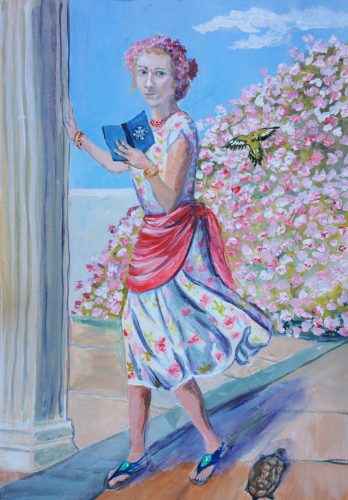 Version 2: better lighting, her face is more ‘there’  and  her  legs are  in  a more  natural  position. 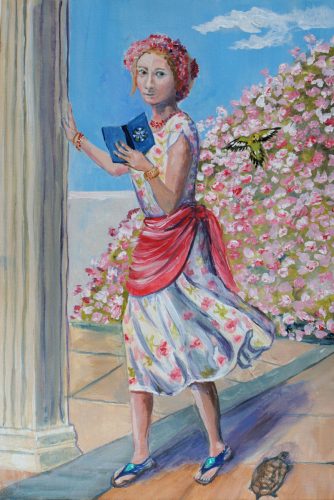 Version 3 : I realised that although the figure and the tortoise had shadows, I had forgotten to give the pillar one! The  shadows  still  don’t  look quite  right here, but  at  least  there  IS a shadow  on  the  pillar where  it  should  be.

Now  scroll  up  to  see  the  final  version  where  I fixed  the  shadows and made a few final tweaks to the lighting!

You  can  see  the  lighting  is  slightly  different again,and that changes the colours. I know that some people feel that paintings should be scanned rather than photographed, because the lighting is consistent then, but… well.

The thing is that a real painting hanging in a real room does change with the light.   This is not a digital image: it’s made up of layers of variably translucent paint, and it responds to the light; its colour, its warmth, its direction.   Putting it in a scanner where it will be lit by a single flash of artificial light is no more ‘accurate’ than  photographing it in warm south afternoon light, or colder north-facing morning light.  I now take photos of my paintings in various locations, then choose one,  adjust colours in software to pick the one where the light pleases me and the image on my laptop matches most closely with the image I have set in front of me.  But none of the photographs are wrong.