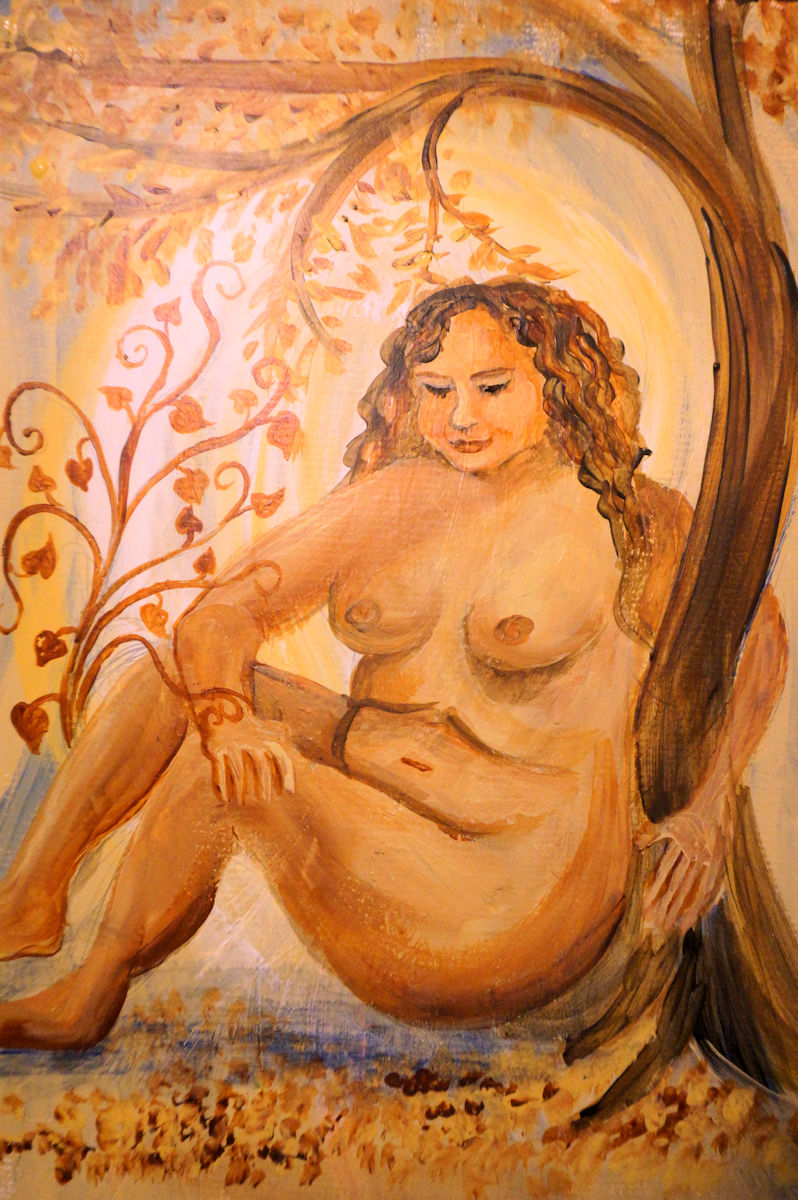 I have been enjoying hanging out on Tumblr, but this week we got the unwelcome news that Tumblr has decided to ban all ‘adult’ images from the seventeenth of December – and they seem to be really very overzealous about it too, since their automatic detection software is flagging up all sorts of things as forbidden, including archaeology, art, pictures showing elbows, ankles etc.  I am rather uncomfortable with this kind of censorship, and I think human bodies are natural and rather beautiful.  So I decided to paint some topless ladies.  The one above is called ‘The Sleep of Yavanna’

“Excuse me, Madam,” Bilbo said very politely, trying not to stare, for the clothing of the Vanyar of Valimar was not quite what he was used to. “I seem to have lost my way.  Could you direct me to the house of Lord Ingwion?”

“Of course,” the Vanyar lady said, turning to address him with swift attention. “You are heading the wrong way, I fear.  If you make your way back towards the Bell of the Unicorn, and turn just where that very tall person with dark hair down to her ankles is going, you will find the House of Ingwion straight ahead of you.”

“Ah!” Bilbo exclaimed. “So that’s where I went wrong.  I was admiring the gilding on the unicorn, you see, and I must have walked straight past.  Thank you!”

He hesitated for a moment.

“Was there something else?” the Vanya enquired in her voice that was like the sound of bronze bells, as the scent of strange spices wafted down the long shining street under roofs of gold.

Bilbo coughed, “I was just wondering why you were carrying a spear,” he said.  “Hasn’t it been thousands of years since the Vanyar went to war?”

“It has!” she told him, and shook the spear fiercely, her golden hair tossing. “Yet the Enemy is only banished. One day he will return, and we will be ready!”

“Oh,” Bilbo said. “Jolly good.  And thank you kindly for the directions.”

As he wandered back towards the turning he had missed, he could not help but wonder if the Vanyar could not have employed their spears usefully against the spiders of Mirkwood, or the goblins of the Misty Mountains.  But as he admired the lilac flowers that hung in elegant sheets from the archway in front of him, he thought that you could see why people who had ended up in a place as delightful as this would want to stay here.

He trotted into the house to see if Elrond had got back from visiting whichever relative it was this time, to ask if he might fancy a spot of lunch.